Personal tales and reflections
on the rise of greyhound rescue

Search and see if there is not some place where you may invest your humanity. 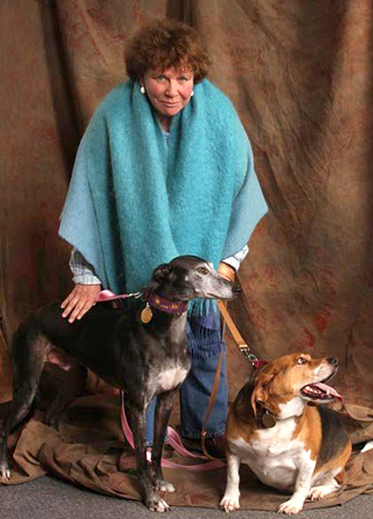 i remember when he had to die-an old sweet dog with cancer.

He clung to his bed and hated to go anywhere. When the vet came and gave him an injection and sent him to heaven. We both cried. Boston Boy was a seasoned racer, aged five, when I got him. I hadn’t thought about getting a dog. It just seemed too bad that a dog with a name like Boston Boy was going to be destroyed and would get no reward for all his work. An extraordinary racer, he finished at five at a top track and was never graded off. After I brought him home and tried to introduce people to him, he would act like a canine statue.

I nicknamed him Shadow because he shadowed me. But alone with my son Nolan and I, he was demonstrative and himself. Shadow wasn’t alone for long. He became long-suffering and patient as more greyhounds entered and passed through his home. Trainers, who knew about his adoption kept calling up to ask me to find homes for more dogs. Greyhounds sat on all the couches and chairs. Boston Boy was permanent; he knew that he was for keeps, for good. But he was like a stone thrown into still water. From him concentric circles started. They are still going out.

He had a good dog’s soul; he was the sweetest boy.

Through Shadow my bond with greyhounds was formed. By the simple act of sparing one dog his death, my life was altered. Many people and circumstances remained the same, but the connections became much more intense, varied and extensive.

I never would have circled out so far had I not brought Shadow home that day. Exhausting work pushes the ripples out, and help comes. My life changed on Mother’s Day, 1983, the day Shadow came. Many people hope for a definitive moment to galvanize their lives. My moment came and brought Boston Boy. He was a real gentleman, my ever loving and faithful Shadow.

They Thank you for Making a Difference Award

There are no upcoming events to display at this time.